Figures released exclusively to Funding Options show the total number of electric vans in use has increased almost fivefold in under a decade, up 460% from just 685 in 2008. 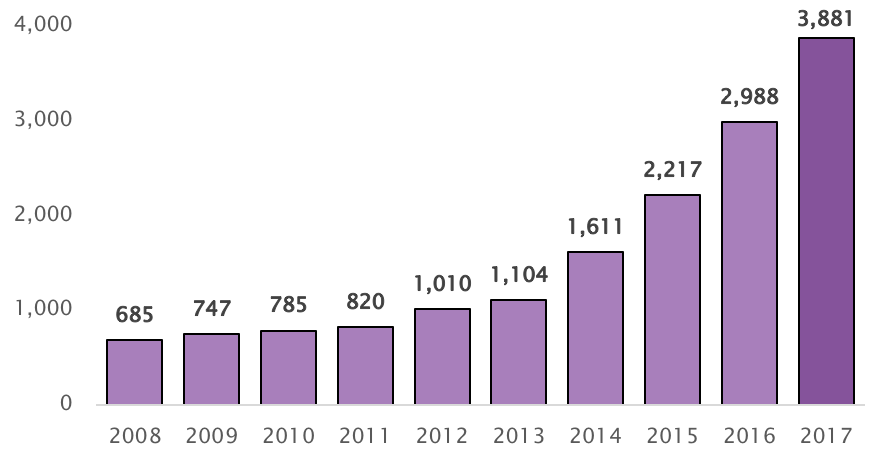 Funding Options says one reason for the growing popularity of electric vans is that they can be a useful tool in establishing a business’s “green” credentials. This can help businesses, especially those using delivery vans, win custom as customers are increasingly likely to choose contractors who are seen to be more environmentally responsible.

From a financial point of view, businesses are starting to favour modern electric vans as they are cheaper to run than older diesel alternatives. Electric vans pay zero road tax and are exempt from the London congestion charge.

Funding Options adds that the rising popularity of electric vehicles can also be attributed to the availability of government grants. Seven different electric vans are currently eligible for a government grant, which pays for 20% of the purchase price of the vehicle, up to a maximum of £8,000.

Funding Options says it is receiving an increasing number of requests from businesses seeking to procure electric vans for help with sourcing appropriate funding from finance providers. It says that leasing and hire purchase are often the best options.

“Cheap-to-run, eco-friendly electric vehicles have now become a serious option for many businesses.”

“Electric fleets are increasingly seen as a worthwhile investment, especially as the infrastructure around charging points improves, particularly in urban areas and motorway service stations.”

“Driving an electric vehicle can demonstrate that a business has a modern approach and an environmentally-responsible ethos, which are often real selling points for customers.”

“Businesses putting up with old models because they are worried about the lease and hire costs of new vehicles should be aware of the finance options available to them.”